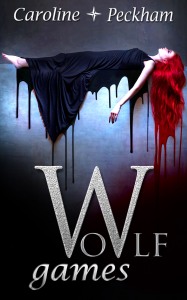 After the trials of the V Games have come to an end, peace has fallen over The Sanctuary for Immortal beings. But for Jameson and Cass, their troubles are only just beginning. On the verge of their happily ever after, their world is torn apart, forcing the two lovers on separate paths. And with both of their hearts broken in the process, they have to find a way to live on without one another.

Whilst Jameson sets off on a quest to save his Werewolf pack members from a madman, Cass is thrust into the arms of a new and dangerous enemy. An enemy who seeks not only her cooperation in his plans, but also, her heart…

In the explosive new season of The Vampire Games, Wolf Games follows Jameson and Cass on a journey of death, romance, betrayal, and a dark force more fearful than the enemies of their past. Can they overcome the trials that are set to befall them, or is it time they accepted their inevitable fates?

After the foundering of IDAHO’s cruise ship, the survivors are washed up on a deadly island off the coast of northern Africa. But in a jungle of shade, it’s not just the Reapers lurking in the forest that pose a danger…

Journeying to an underground institute at the heart of the island might be Cass and Jameson’s only hope. But with Ulvic Hund hunting them down alongside his newfound companion, Rockley Jones, time is of the essence. And they soon have no choice but to face the deadly security system on the island to get to safety. Even if that means placing their lives in the hands of Silas Madigan.

LINKS TO THE REST OF THE SERIES:

V GAMES: FRESH FROM THE GRAVE

THE RISE OF ISAAC SERIES

THE RISE OF ISAAC NOVELLAS

Click here to find the latest information and more at http://www.carolinepeckham.com

Or breeze by my page on Goodreads

V GAMES: FRESH FROM THE GRAVE

THE GAMES AREN’T OVER.

Selena Grey has faced death and won. Freedom awaits so long as she can let go of the last thing that ties her to the island where the V Games were held. But despite the fact surviving has always been her priority, suddenly, she finds herself torn between her head and her heart.
Meanwhile, the Helsings are about to host a brand new game on the Isle of Lidelse where blood and money rule above all else. But when Selena finds out a devastating truth that puts her loyalty to the test, will she find the courage to go on? Or will she retreat from a life she never wanted, even if that means giving up the one person her heart beats for?

Start the series now with V Games – check out some of the reviews it’s had below!

“Holy smokes, this novel was everything I have ever wanted, needed and craved. Easiest 5 star review of the year.”  – Goodreads Reviewer

“6 stars for the fast-paced plot! There was not a wasted moment in this one. Be warned: once you start, you’d better have the time to finish, because you won’t want to put it down.” – Top 100 Goodreads Reviewer
“Want the truth? This book was a complete surprise. I’ve never had great times with vampire novels, but I’ve got to admit with a pinch of smugness that V Games is the vampire novel I didn’t know I needed until I started reading it.” – Top 3 Best Reviewer on Goodreads
“Think The Hunger Games, The Testing, and Vampire Academy…but BETTER. You read that correctly! This book surpasses some of my favorite books of all time! Color me very, very pleasantly surprised!” – Goodreads Reviewer
“This has to be the most OUTSTANDING BOOK, I have read all year in 2017 so far, and I don’t say this lightly!!! – Goodreads Reviewer

LAST ONE TO THE GRAVE, WINS.

Being a killer wasn’t what eighteen year old Selena Grey ever expected she’d become. But with her stepfather’s blood fresh on her hands, she finds herself walking into an eight by six prison cell where she’ll live out the next twenty five years of her life.

Or so she thought…

When a man as beautiful as he is terrifying walks into the prison, Selena is the only one seemingly unaffected by his charms. But Varick’s impossibly dark eyes are trained on her and her alone, frightening Selena of what his presence forewarns. It’s not long before she finds out as she wakes on a ship in the dead of night, a captive of the forbidding Varick who seems more beast than man.

But when she arrives at a barren and isolated island in the stormy north sea, she soon realises that the obnoxious Varick may be her only hope of survival. Because, in a place where polar night reigns for the next six months, a powerful and cruel family are about to start this year’s season of the V Games. And Selena is marked to participate in the blood sport, hunted by ravenous vampires and surviving the harsh terrain of the bleak island. And, not only that, but Selena just became the highest bid on contestant in a century…

PRE-ORDER NOW FOR A LIMITED TIME RELEASE PRICE OF 0.99!