2016 has been an eventful year for me. Last Christmas I made the decision that I wanted my life to change…though I had no idea quite how I wanted that to happen…

orward five months and a helluva a lot of umming and ahhing – I took a trip to Costa Rica to take a break and think about what I wanted next from life (not a bad place to do it, sitting on a Caribbean beach with a cocktail in hand!)

It wasn’t until two days before I came home, laying in a hammock beneath a swaying palm tree (slightly concerned about the coconuts which had been plummeting like missiles from the sky the previous day) and I had an epiphany. I didn’t want to go home.

Now I should mention I am by no means what you would call ‘misfortunate’ in the life I was leading back in the UK. But I had, for the past year or so, been looking for something more. 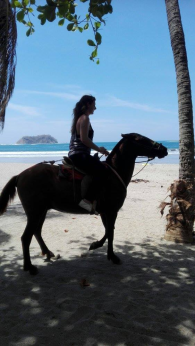 And I wasn’t sure just what that was until I lay under the Costa Rican sun in a hammock. Of course, life isn’t a holiday. I couldn’t stay abroad and I inevitably got on my British Airways flight home – but with a renewed sense of purpose. Because I had decided to make the move abroad- something I would scarcely have even considered the previous year but which suddenly made so much sense.

The year ticked by, I returned to my job, became an auntie to a beautiful baby girl and continued to write my fantasy series in the meantime. But the desire never went away. So I booked a ticket back to Costa Rica, enrolled in a TEFL course on the stunning pacific coast and in 20 days time I will be jetting back across the world to embark on a new adventure.

I’ll still be writing, the final instalment of The Rise of Isaac is well underway but I’ll also be focusing on blogging about my experiences as I risk it all and take a metaphorical leap of faith. I feel the weight of that risk very much at the moment- giving up my comfortable life, my steady income, my  gorgeous flat – but sometimes in life you’ve just got to risk it all for that gut feeling.

6 thoughts on “An author abroad – follow me across the world!”